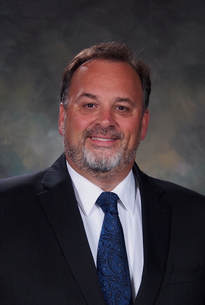 Joe Gulledge a native of Lilesville, NC holds a Bachelor of Music degree from the University of North Carolina at Pembroke, and a Master of Conducting Degree from the American Band College in Ashland, Oregon from Sam Houston State University. In 2003 he earned his National Board Certification in Music. Mr. Gulledge currently serves as President-Elect of the South Carolina Music Educators Association and is an active adjudicator, clinician and performer across the Southeast including, North & South Carolina, Georgia & Florida.

Mr. Gulledge is currently the Director of Bands at Clover High School and previously served as Director of Bands for Rock Hill High School for 18 years. Bands under his direction have consistently earned superior ratings on and off the field. Concert ensembles under Mr. Gulledge’s direction have received numerous superiors at the South Carolina Concert Festival including overall superior ratings in Grades V & VI for the past 14 years. Under Mr. Gulledge’s direction, students have been named to the South Carolina Regional Honor Band, the All-State Jazz Band and All State Honors Bands over 250 times.

Mr. Gulledge marching bands have been named finalists for the SCBDA Marching Band Championships 24 consecutive years including 3rd place in 2003, 2007, 2009 & 2011 and 2nd place in 2008 & 2010 winning the “High Music Caption” both years. Bands under his direction have been finalists at Bands of America Regional or Super Regional events 8 times, most recently placing 9th at the Winston Salem Regional in 2014. Band programs under his direction have also received the South Carolina Band Director Associations Outstanding Performance Award, the state’s highest award, for the past 22 consecutive years.